Transformation of the automotive ecosystem has already been rung in by growing levels of connectivity and digitalization, and its triumphal march continues. Drawing an analogy to the mobile phone industry is unavoidable here: Triggered by the “smartphone” as a disruptive innovation, mobile phones underwent radical transformation. An entirely new ecosystem was created consisting of app developers, app stores, and end devices. While qualities that used to be in the foreground included device size and battery longevity, those properties were soon to be trumped by others such as usability and connectivity. Associated with that came a drastic change in user behavior. Instead of using mobile phones only for making phone calls and writing text messages, consumers began to prefer to use them as all-in-one devices – including accessing the Internet, apps, and games. Industry giants like Nokia slept through this trend and can now only be found in the market periphery. A similar fate could also be suffered by the big established automakers if they miss out on innovative developments. To prevent that from happening, the right preparations for a successful future need to be made today. 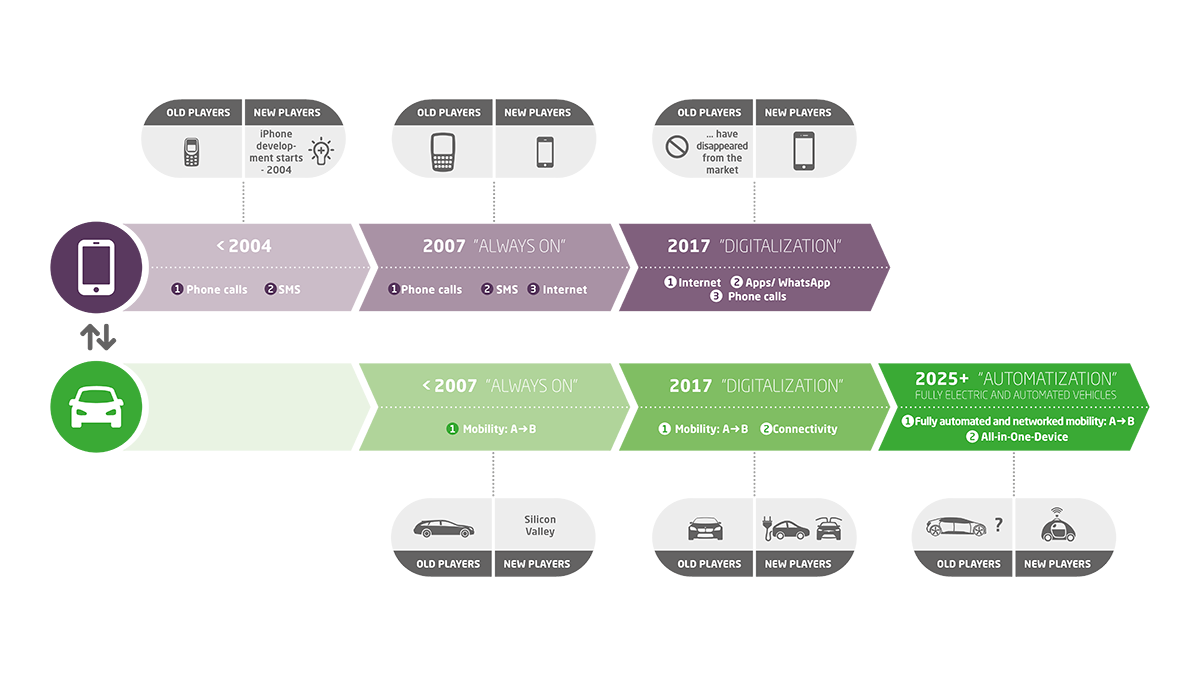 The automotive industry in transformation

The radical transformation in mobility at the turn of the last century (1900) was the hour of birth for the automotive industry as we know it today. Within one decade the method of transportation dominant up to that point, the horse-drawn carriage, disappeared. The majority of the population did not think a transformation of that scale would be possible, and were ultimately proved to be mistaken.

Driven by digitalization and the resulting disruptive changes in the automotive industry, the way things look out on our streets will be undergoing radical change once again in the near future. The big players in the automotive industry need to gain an awareness of this fact and react to these external changes. Otherwise, they run the risk of suffering the same fate as the companies that used to lead the mobile telephone industry.

The car of the future: Smartphone on wheels or all-in-one device?

Despite there being many differences between automobiles and mobile phones in everything from purchase price, operating costs, development time, service life, and the individual components (electrical / mechanical system), there are also key parallels (see figure “Mobile phone vs. Automobile”). User behavior will also fundamentally change with respect to cars in the upcoming years. In addition to mere transportation from A to B, cars will additionally have to align with the tasks of people’s everyday lives as all-in-one devices. That includes digital functions like in-car payment, assistance in finding a parking space, as well as office functionalities. As has already occurred with the mobile phone, automotive costs will also shift from a one-time purchase to continuous additional charges, which will be primarily digital in nature.

Yet the potential of automobiles goes well beyond that of a mobile telephone. When it comes to smartphones, human interface is usually limited to a display, a camera, and voice control. By contrast, the car of the future will make it possible to use the entirety of the 3D living space (i.e. the vehicle’s interior) as an interface for interaction, making automobiles significantly more than just smartphones on wheels. Consequently, the vehicle’s interior and the way it combines with new digital functions are going to become decisive USP s for occupants. 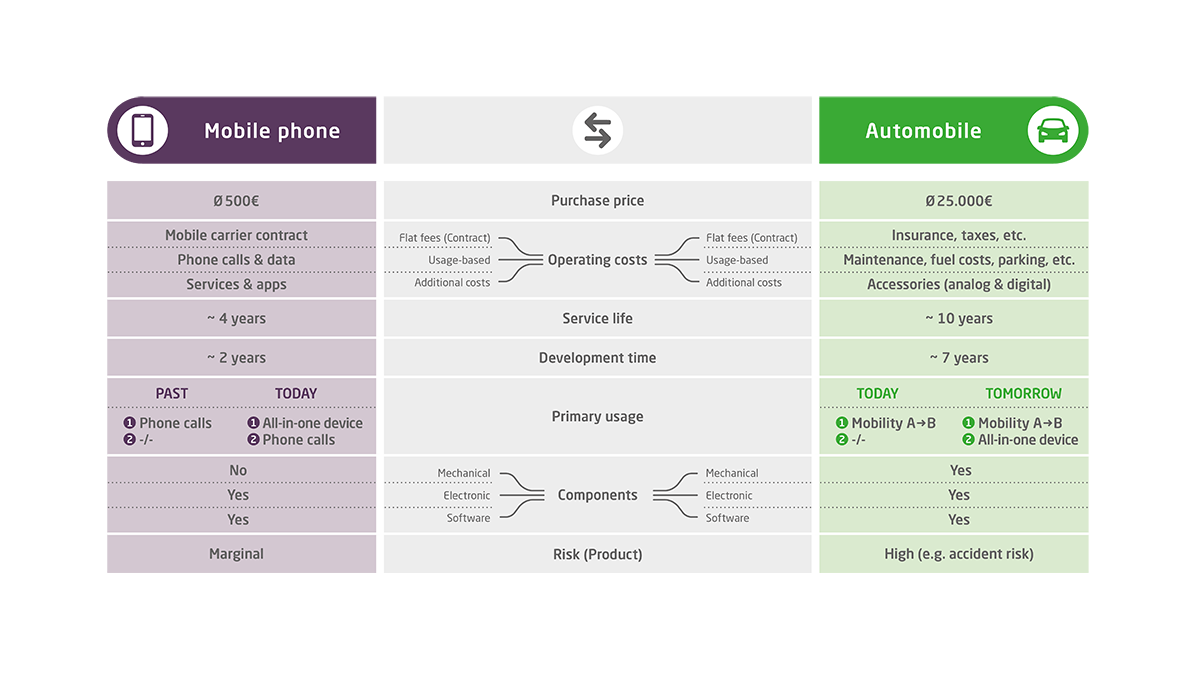 The advancing developments in highly-automated driving will additionally provide occupants with more in-vehicle free time or “new usable time”. This time gain should be used in a sensible manner according to individual customer requirements. On-demand car functions (ODCF) represent an opportunity for adapting to these market changes. Customers can book new services and functions at any time from right within the vehicle. The spectrum of functionalities here ranges from additional comfort and productivity functions to comprehensive entertainment options. 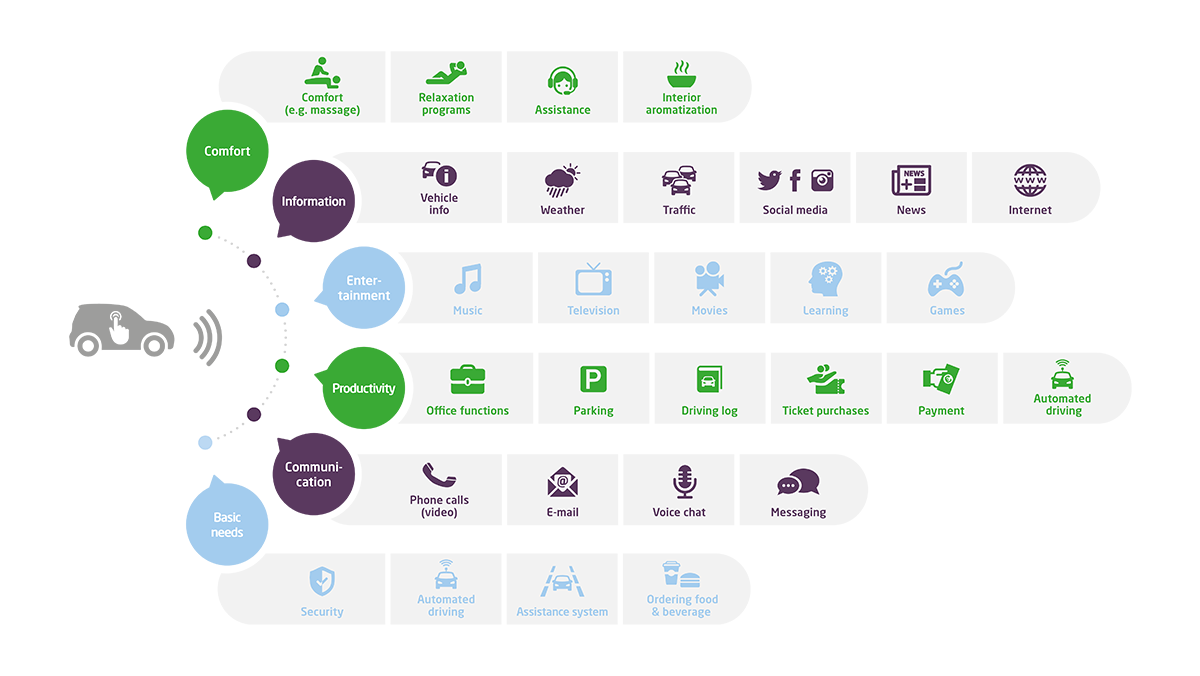 For the automotive industry, in turn, ODCFs provide for entirely new sales opportunities as well as new corresponding business models. Yet additional industries like banking and insurance can also benefit from these developments with innovative offers and functions.

The ultimate question in association with this development is not whether the “new usable time” is going to be filled. The question will rather be: Who is going to fill that time and make money off it? If automakers do not succeed in attaining market leadership here, they may end up losing a key race against competitors like Google, Apple, and Co.

Q_PERIOR recognized this development at an early stage and has a comprehensive focus in on-demand car functions. In an end customer survey, Q_PERIOR has learned which on-demand car functions are already being used, which functions respondents would use in the future, and which utilization preferences they have for innovative ODCFs not yet on the market.

Would you like to learn more about on-demand car functions?

We have summarized the core findings from the survey for you in an infographic.
Download now

On-Demand Car Functions: A new Revenue Source for the Car of the Future

5 Questions regarding intelligent and connected mobility

The IT department – chumps, or business drivers?